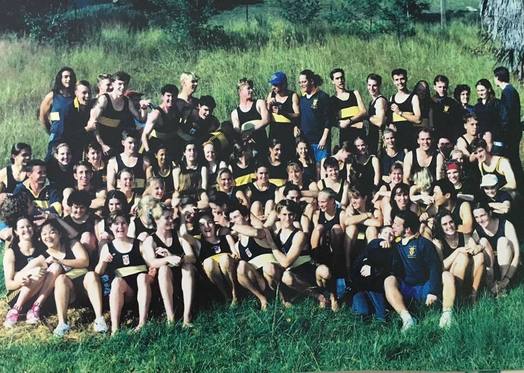 UNSW Rowing Club 1992-93 NSW Premiership winning sqaud
John Argue and Doug Crawford founded UNSW Rowing Club in 1952 after they drove from Dover Heights to the then NSW University of Technology to attend their engineering lectures. There they discovered a common love of rowing, which inspired them to start the club. David Shaw was able to negotiate a deal with Mosman Rowing club to use their boats and facilities, then located in Mosman Bay. Numbers in the motley gang of enthusiasts started to grow and despite their only boat leaking they had a dream to one day line up next to Sydney University at the annual Intervarsity eights race for the Oxford and Cambridge Trophy.

With some help from Jim Budge who had taken over Gus Green’s Racing Boats business they were able to acquire an eight once used by the Australian team at the 1936 Berlin Olympics. Shortly afterwards an order for a four was placed as the numbers started to grow! With three boats to their name plus oars to match they relocated to Kings School with Mr John Grice. About a dozen young hopefuls had been learning to row for about three years by this point. By 1955, the club was established in Cabarita and able to start seriously preparing for the 1956 Intervarsity race in Melbourne.

Jim Budge took on the herculean task of preparing the first UNSW Intervarsity VIII with his characteristic enthusiasm and dedication for which he was renowned. The crew trained at a ‘rowing camp’ from mid-April for 6 weeks in preparation for the June 2nd race. David Shaw – a founding member – greeted the rowers upon their return with a hearty breakfast before rushing off to a 9am lecture.

Melbourne University were the host of the 1956 Intervarsity eight race and supplied our club with a high quality shell for racing. John Argue remembers “the recollection I have of those training sessions leading up to race day was the incredible sound the crew made – catch and release – as we rowed under the low-level Yarra bridges! Poor timing was impossible. I have no clear recollection of the race itself other than the Melbourne crew disappearing rapidly from sight on our bow side after the start while we found ourselves reasonably matched - stroke-for-stroke - with the Tassie crew on our stroke side. This gave us a great incentive to “keep at it” and although the Tassie crew did beat us narrowly to the finish, our efforts through the event saw us roll in sixth, ahead of Adelaide University. We were exhausted but “chuffed”: we had beaten another Australian University!"

Over the years, coaches have changed, equipment has been improved and the location of the shed changed but throughout all this the passion for UNSW Rowing has remained strong. The club continued to grow - even winning the NSW Premiership in 1992-93 and 1993-94!